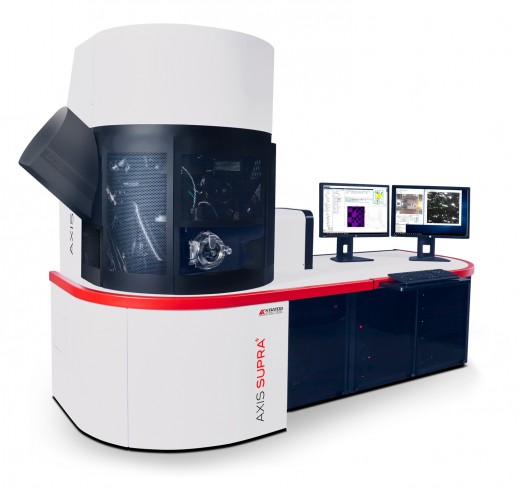 X-ray photoelectron spectroscopy (XPS) is a powerful surface analytical technique that allows determination of elements at a material surface and also how the elements are bound to each other. It is depth sensitivity can be controlled from several nm to microns via sputtering or angle-resolved measurement. The method finds use in a diverse range of application areas, and from fundamental science to industrial research, product development and QC.

Directly after the official opening of 2MILab at the start of January, a new AXIS Supra+ XPS system from Kratos will be installed and users trained. The highly automated system enables efficient routine analyses, while at the same time being a powerful research instrument, with modifications to allow operando studies of model solar cells under illumination, and the injection of gaseous molecules to observe catalyst surfaces in action. It will be equipped with Ar-cluster sputtering for gentle sputtering of organic materials, enabling removal of surface contamination, novel depth profiling studies etc. The instrument will further be equipped with UPS (ultraviolet photoelectron spectroscopy) allowing highly accurate measurement of the binding energy of valence-level electrons. This can in turn be used to determine work function, of interest in many areas including corrosion, solar cells and batteries. It can also be used to study surface adsorbed molecules due to it’s extreme surface sensitivity. Finally, it will offer an access port for air-sensitive samples to be transferred directly from a glovebox, of relevance in lithium-ion battery research among other applications.

This website uses cookies to improve your experience while you navigate through the website. Out of these, the cookies that are categorized as necessary are stored on your browser as they are essential for the working of basic functionalities of the website. We also use third-party cookies that help us analyze and understand how you use this website. These cookies will be stored in your browser only with your consent. You also have the option to opt-out of these cookies. But opting out of some of these cookies may affect your browsing experience.
Necessary Always Enabled
Necessary cookies are absolutely essential for the website to function properly. This category only includes cookies that ensures basic functionalities and security features of the website. These cookies do not store any personal information.
Non-necessary
Any cookies that may not be particularly necessary for the website to function and is used specifically to collect user personal data via analytics, ads, other embedded contents are termed as non-necessary cookies. It is mandatory to procure user consent prior to running these cookies on your website.
SAVE & ACCEPT
Contact 2MILab